Back to Other Land For Sale in Wairoa 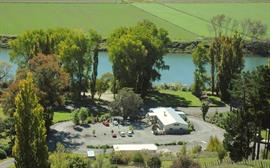 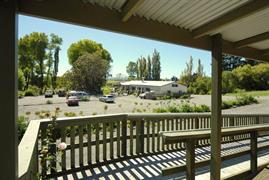 Cafe 287 with Motel Units near Wairoa, Business is for sale.

Vendor Finance offer - to buy the Land & Buildings when purchasing the Business.

The Cafe 287 that is overlooking the Wairoa river just a few kilometers south of Wairoa on state highway 2 in the sunny Hawkes Bay is now for sale.

The owners and developers of this property and business, John and Pauke Trafford live in a 2 bedroom cottage on site and along with the cafe have four very nice motel units set aside for travellers and holiday makers alike.

There is also, at the rear of the Cafe, a two bedoom apartment - with a downstairs bedroom with ensuite and an upstairs room with double and single bedding.

This cafe is a very good business and is kept busy 7 days a week with hours from 8 am - 4 pm.
The motel

The motel has three studio type units with queen size beds and a special wheelchair access unit with a Queen sized bed and is a good revenue earner for the company. The units have all of the normal motel facilities in them.

This is a very nice country business to own with a good financial performance backing it. The current owners opened the business 5 plus years ago and it has been a rewarding exercise for them.

This is a chance for those that want to have a nice busy business, in the countryside but not too far away from a town centre and where else can one find the many hours of sunshine then in the Hawkes Bay.

Well worth taking a good look at this one - maybe on your next weekend drive.

Wairoa is a town in New Zealand's North Island. It is the northernmost town in the Hawke's Bay region, and is located on the northern shore of Hawke Bay at the mouth of the Wairoa River and to the west of Mahia Peninsula. It is 70 kilometres northeast of Napier, and a similar distance southwest of Gisborne.

Early settlement in the area included a whaling station and trading post, dealing largely in flax. Its initial name was Clyde, but this was changed largely to avoid confusion with Clive near Napier and Clyde in the South Island. The north part of the town is called North Clyde. The town rose to prominence during the New Zealand Wars, during which time it was a garrison town.

Wairoa is a manufacturing and farming service town. It is the seat of the Wairoa District Council. The Wairoa District covers the northern half of the bay's coast, and extends from Mahia Peninsula to Lake Waikaremoana, and south to the mouth of the Waikare River. It has a population of 8,481 inhabitants (2006 census)[1]. The District has a land area of 4,119.18 km² (1,590.42 sq mi).

Wairoa is situated on the SH2, which gives connections to Gisborne to the north east and Napier to the south west. Wairoa is connected to the Central North Island by SH38 which goes from Wai-O-Tapu via Murupara and Frasertown to Wairoa, and which connects to Rotorua via Te Urewera, and Lake Waikaremoana.
Wairoa District

Wairoa is the main town of Northern Hawkes Bay and is the gateway to Lake Waikaremoana, Mahia Peninsula and the wilderness of Te Urewera National Park. Wairoa in Maori means ‘Long Water’ and is located on the banks of the expansive Wairoa River, which provides an excellent and sheltered venue for water-skiing, jet boating and rowing. The town offers a pleasant, relaxed lifestyle, perfect for those who enjoy the outdoors.

Your first port of call should be the Wairoa i-SITE Visitor Centre on the corner of SH2 and Queen Street for maps and information about local attractions. These local attractions include the Portland Island Lighthouse, built on the island from solid kauri and used from 1878 to the mid-1950s. The lighthouse was moved to its present position in 1961. Kopu Pitiera Memorial Stone, opposite the library on the riverbank serves as a memorial to a turbulent period in Wairoa's history during the 1860s. Kopu was a major figure in the conflicts of the time. Wairoa was once a river port with wool, flax, fibre, meat and dairy products as the main exports of the area.

The Heritage Trail walk starts on Marine Parade and is abound with historic sites such as River Wharf, the most substantial remaining wharf of the export era and pretty picnic spots. After a long day walking, fishing or sightseeing visit the Morere Hot Springs on SH2, 40 minutes from Wairoa.

The pricing is unfortunately not available for this property online. Please submit your details using the form below and the agent will contact you to discuss this further.