Back to Other Land To Let in Plymouth 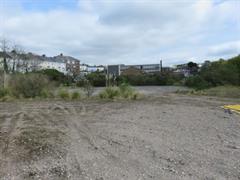 The site is located within the Plymouth conurbation in an established residential area. The surrounding land is fully developed. Road access is good, with St Levan Road connecting to Clovelly Road connecting to the A3064, which leads to the city centre to the east and towards North Prospect and St Budeaux to the west. The surrounding land is predominantly in residential use with high density terraced housing largely dating from the Victorian era. There are commercial uses immediately adjacent to the property to the east and west.

The topography of the land is relatively level, having been previously remediated and cleared. The operational gas governor building remains in situ and the Landlord will need access at anytime without prior notice, in the event of an emergency or maintenance requirements.

The property comprises a former gas holder site where two holders were previously situated. Both holders have been removed and the site remediated.

The site is open and level with a hardcore and part macadam base. There is a vehicular access point off St Levan Road. We are valuing on the basis that the site is remediated and capable of redevelopment, subject to the existing governor remaining in situ or being relocated within the site.

The site is enclosed by substantial fencing and block walls.

The site is situated in the Ford area of Plymouth. This is a predominately secondary residential area dominated by terraced housing dating from the early 20th Century. The site is located approximately 1.5 miles to the north west of the City Centre and close to major arterial roads, providing access and egress into the City Centre.

Assumed sui generis under the Use Classes Order effective from 1 September 2020. We would advise interested parties that clarity is sought on the actual planning use.

Available by way of a new lease, length negotiable at an initial rent of £75,000 per annum