Back to Offices To Let in Prague 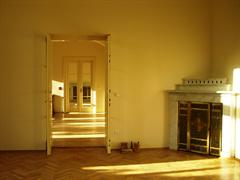 Rarely does a property of such distinction, refinement, and utility appear for rental in what has unfortunately become the architecturally confused Prague market. Instead, discerning tenants are mostly forced with a frisson to choose among variations on the jejune modern style; meters of glass and steel stretching whichever way the imagination of the architect wanders. If your eye resents the glare bathing the modern corporate office and you yearn for a softer glow, if diminished ceilings crimp you so that you are ready to appreciate alternate forms, rooms that rise to liberating heights, if lengthy commutes and battles for parking spaces threaten to render your existence nasty, shortish, and brute, then an alternative sits quietly in the finest district of Prague, like a sword in a stone, waiting for the tenant that was destined for its use.

THE HISTORY
The Velflik Mansion was built by the eponymous individual in 1919. Conceived more than twenty years before, the mansion was built to serve the enjoyment of one man, engineer Vaclav Velflik, one of three brothers who contributed to the development of modern Czech civil engineering. His brother Albert, an early rector of Prague's Technical University, designed bridges in Prague. The third, architect Josef, designed the mansion. The Velfliks were chiefly builders of railway tunnels, bridges and dams, but Vaclav Velflik was also a gifted real estate developer who assembled paquets of property so he could build a residence worthy of being neighbour to the famous palace of Wallenstein, directly across the street. Wallenstein had the misfortune of being assassinated before his palace was completed. Velflik saw his mansion to completion. Imagine his pride as he breakfasted in the brilliantly tiled sala terena, or gazed up from the grand meeting room to Prague castle, a mere hundred meters above him, and basked in the pleasure of living in the finest part of what has now become a UNESCO designated protected area, the world famous Mala Strana. Ever a restless spirit, Velflik converted his creation to a grand office building for his engineering firm, but not before several years as master of the house and host to such distinguished guests as president Thomas Masaryk.

The Physical Condition of the Building: FULLY RENOVATED

2011 saw the complete renovation of this building. All aspects conform fully to EU standards. Occupants will enjoy the convenience of full internet, fire alarm, security alarm, showers, toilets, kitchens, as well as capacious staterooms, offices, storage areas, and parking. This property is almost without compare in the Prague rental market.

THE TENANT
A person or organization of distinction and duration. The Velflik mansion can welcome an office of lawyers, a corporate headquarters of an established firm, an embassy, a non-governmental organization. Ancestry and gravitas and a firm wish to establish oneself and make one's mark for an enduring future will be the profile of the ideal tenant.

THE PRICE
Per square meter the price of this location is one of the most competitive in Prague. There are also 15 to 18 parking spots on site, which makes this a unique deal in the Mala Stranska district. You may inquire about price and other matters of negotiation.

Twenty meters from Malostranska subway and tramway stations. Set back thirty meters from the street. Your neighbours on either side are the Belgian embassy and the Polish embassy (a hundred meters above sits the presidential palace). Czech senate across the street, chamber of deputies at 200 meters. Secure grounds.