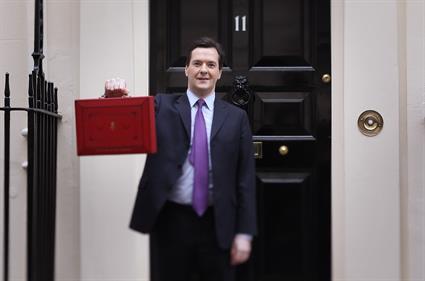 This year’s Budget is probably George Osborne’s most critical (and perhaps last) one yet, with only two months until the General Election.

The Chancellor’s triumphant tone was unsurprising and continued throughout his speech, which began with numerous ‘we choose' statements, one of which was about small business:

‘We choose aspiration,’ the Chancellor told a restless parliament. ‘This Budget backs the self-employed, the small business owner…’

But was there proof of this in the Budget?

Considering that many small businesses regard business rates as their greatest hindrance to growth, there wasn't much attention paid to individual rates.

However, in a bid to re-affirm that the Government wants a ‘northern powerhouse,’ Osborne claimed that the councils of four regions have been told they can keep the entireity of the income from local business rates of shops and restaurants instead of the current arrangement of having to give nearly half to central goverment .

Greater Manchester, Peterborough, Cheshire East and Cambridgeshire will take part in a trial run from April and will begin receiving all the rates paid in the areas. If devolution is successful, other councils across the UK could also receive 100 per cent of the benefit of the rates.

‘We have reached a provisional agreement to allow Greater Manchester to keep 100 per cent of the additional growth in local business rates… We are going to offer the same deal to Cambridge and other surrounding councils and my door is open to other areas that want to proceed as well.’

The main aim is to enable local businesses to grow with the increased rates collected by the councils.

On the whole, the move to devolve business rates to local councils has been welcomed. However some have warned that Government needs to take care that authorities don’t abuse their power and increase rates to subsequently fill gaps in budgets.

There was a further mention of the plans for a business rates review. Chairman of the Federation of Small Business (FSB), John Allan, said that the review was ‘long overdue’: ‘It must deliver tangible benefits to businesses and not end up as just another report that sits on the shelf.’

Tax avoidance and clamp down on big corporations

This was a key topic for Osborne and while he said that there would be ‘no gimmicks,’ the clamping down on rich individuals and tax avoiders certainly seemed like a crowdpleaser.

This statement led to another 'Osborne promise' to make multi-national corporations pay more tax (‘Google Tax’) and also to come down harder on tax avoiders by imposing bigger financial penalties and even prison sentences:

‘I can confirm that we will legislate for it next week and bring it into effect at the start of next month… And we’ll no longer allow businesses to take account of foreign branches when reclaiming VAT on overheads – making the system simpler and fairer. We will close loopholes to make sure Entrepreneurs Relief is only available to those selling genuine stakes in businesses.

‘We will issue more accelerated payments notices to those who hold out from paying the tax that is owed. And we will stop employment intermediaries exploiting the tax system to reduce their own costs by clamping down on the agencies and umbrella companies who abuse tax reliefs on travel and subsistence – while we protect those genuinely self-employed.’

George Osborne announced the scrapping of the increase in fuel duty scheduled for September.

Corporation tax cut and no NI for employing under 21s

From April, George Osborne announced that corporation tax would be cut to 20%, while National Insurance would be abolished in the employment of under 21s.

‘I am also today amending corporation tax rules to prevent contrived loss arrangements,’ the Chancellor said in the Commons. He also mentioned that 5 million self-employed workers would prosper from the scrapping of Class 2 National Insurance.

Abolition of the Annual Tax Return

This was a major positive for the self-employed who harbour a perennial dread of the Annual Tax Return.

Upon calling it ‘complex,’ ‘costly’ and ‘time-consuming,’ he stated that the coalition planned to abolish the annual self-assessment tax return altogether. Instead, new digital tax accounts will be in place:

‘Millions of individuals will have the information, the revenue needs to new digital accounts. A minority with the most complex tax affairs will be able to manage their account online. Businesses will feel like they’re paying a simple, single business tax and again for most the information needed will be automatically received.’

Osborne regarded the change as a ‘revolutionary simplification of tax collections’ and echoed that long-standing HMRC strapline; ‘tax really doesn’t have to be taxing.’

At the end of his speech, the Chancellor's triumphant tone appeared to reach its crescendo: 'This is the Budget for Britain: the comeback country.'